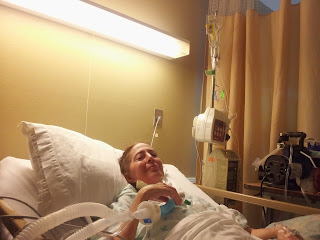 It was a triumph when the nursing home speech therapist finally approved a talking and eating valve for me, also known as a Passy-Muir valve.

But less than a week after I started using the voice-giving valve, it was literally snatched away from me.

Every night in the nursing home, I was awoken for a blood test or to check my trach. One night, a respiratory therapist woke me up to change my trach, Afterwards, I went back to sleep. But when I awoke in the morning and tried to say something, I could barely make a croak.

I took a drink of apple juice and tried again.

Maybe it was congestion? I summoned Ricardo using the call button. When he arrived, I gasped out a request for a breathing treatment.

Afterward, I tried to cough up as much phlegm as I could.

Still, no sound came out beyond what I could eke out before I received the valve. I took another drink. Nada. So I pressed the call button.

"What is it again?" asked Ricardo.

He unhooked the tube leading into my trach. "Your speaking valve is missing! What happened?"

I shrugged. Then I remembered, "Last night someone...woke me up to...change my trach." I was doing my best to take breaths between words, but as usual, I wound up trying to say too much between breaths.

We immediately realized what had undoubtedly happened. The valve had been tossed into the trash with my old trach.

"Who did this?" Ricardo said, clearly pissed.

I shrugged as I shook my head, instinctively returning to the mime I had perfected when I could barely speak.

At first I hoped it might be possible to retrieve the valve, but it soon became clear that this was impossible.

"Do you know how expensive those valves are?!" the incensed Ricardo exclaimed. "I'm going to find out who did this to you. This shouldn't have happened. Carelessness like this is unacceptable!" Ricardo was a pretty even-tempered person, and this was about as close to raging as he got.

"I'll have to check. We don't normally keep many of these in stock."

As it turned out, they didn't have another valve. When I asked the next day, Ricardo told me they were ordering a new one.

The next week, he said they had ordered it, but it hadn't arrived yet. The week after that, he said he would check into what the hold-up was.

Each day, the first time I saw Ricardo in the morning, I would ask him about the valve.

"I'm sorry, it's still not here," he would tell me after he had checked the storeroom.

Eventually, Keith found a company that sold Passy-Muir valves on Amazon. He paid for it out of his own pocket, including the rush shipping.

Finally, I had my voice back...again.

It wasn't long, however, before my valve was threatened yet again.

Here are the previous installments in this Scenes from My Coma Recovery series: Part One; Part Two; and a related SfMCR: Gaining the power of the pen.
Posted by Unknown at 10:06 AM