Breezing Through the Yawning Chasm of Death 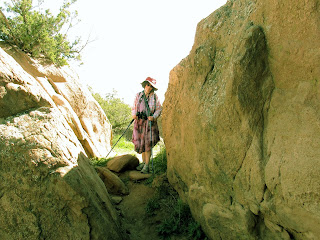 The history of our walks/hikes at Vasquez Rocks can be told in the assistive devices I've employed. The first visit to Vasquez Rocks, on March 30, 2014, was also the first time I used the four-wheeled rollator Keith had bought for me on a rehab walk. 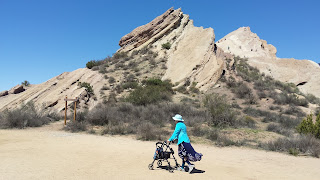 Keith didn't know that rollators aren't recommended for people who are just beginning to walk again. It was the only type of walker he could find in the drugstore for my four-hour tour of our home, on furlough from the nursing home.

He only needed to buy it in the first place because a bitchy physical therapist wouldn't allow me to check out a walker, as the PT helping me to walk had instructed me to do. But he was off duty, and I was at her mercy.

We learned why rollators aren't advisable when it slipped out from under me while I was trying to get to the toilet. I banged my head on the bowl, but wasn't hurt.

I think the PT on duty that Sunday wouldn't allow me to check a walker out, despite the fact that it was common practice, because she didn't approve of John Silva's methods. She had previously carped that I wasn't really walking, since he was initially supporting my weight as I walked.

The furlough was to work out any kinks in preparation for my pending release from the nursing home. As I've written about before, we had no choice because I would've lost my health coverage if I had stayed in Country Villa Sheraton past October 31.

So, instead of allowing me the use of a walker, she actually endangered me. She's lucky I wasn't injured.

But I was much stronger by March, 2014. We knew that my safer, two-wheeled walker would be all but useless at Vasquez Rocks. And since I was a lot more stable at this point, we decided to give the rollator another try.

The next time we went to Vasquez Rocks, on March 22, 2015, we brought my lighter, seatless, three-wheeled rollator. But I soon abandoned it when it became stuck in the sand of the rougher trails we were attempting. Keith had recently given me the hiking sticks which have proven to be invaluable in opening up landscapes I could never have tackled otherwise.

Last Sunday, we went to Vasquez Rocks with Joella. She brought with her the identical hiking sticks we gave her for Christmas.

We again travelled along the Geology Trail. The narrow path, which Keith gave the tongue-in-cheek name, the Yawning Chasm of Death, was now a cinch for me.

And the hiking sticks allowed me to climb most of the way--up a steep slope--to the undulating stone walls I had only admired from afar (see Tumblrs). It was a bit like walking along the bottom of the Grand Canyon in miniature.

The hiking sticks continue to open up new avenues for me and my recovery.