Onward and upward to the observatory (and my recovery) 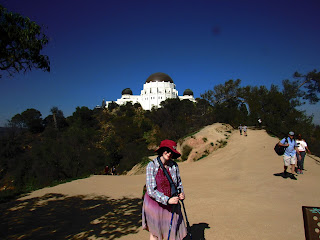 We had seen the intrepid hikers embarking on the steep path up the mountain toward the Griffith Park Observatory on our walks through Ferndell. We admired their determination, but knew I wasn't up to such a trek.


Last Sunday, we finally decided I was probably strong enough to attempt the ascent. Our quest was complicated by the fact that we initially took the wrong path--we're both directionally-challenged. We therefore proved that I was strong enough to walk the tropical paradise of Ferndell and also hike to the observatory. I had been thinking that a walk to the observatory would make the lovely, but no longer challenging, Ferndell more of a work-out for me.
The first path we took was steeper and rougher than Ferndell, though far less lush. Though nice, Ferndell would've been more pleasurable. And shadier, too, on this summer-like winter day.

We finally reached the top, we weren't able to tour the refurbished observatory nearly as much as we wanted to. But it a good thing that Keith did his best to restrain my enthusiasm as we entered that famous building. (See Tumblrs for some pics taken inside, on the roof, and on the grounds. Bonus: Pics of the Hollywood sign--it's two icons in one!)

After our lunch at the Cafe at the End of the Universe--nice shout-out to one of my favorite authors!--we headed back down the mountain. We had barely started before my exhaustion flooded back. By the time we reached our car, I felt like I just might fall back into a coma from sheer exertion.

All in all, we hiked 3.7 steep miles. The hike was so hard that even Keith felt wiped out.

But we had reached a new pinnacle in my recovery.