The Long Goodbye for an Atheist-Positive President 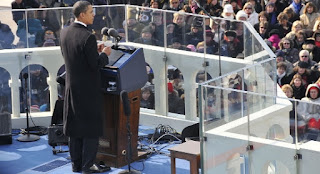 The Secular Spectrum: The Long Goodbye for an Atheist-Positive President

Though President Obama is almost certainly a Christian, as I have fantasized (and absolutely not a Muslim), he is without a doubt the first president raised by a secular humanist.

It's no coincidence that he regularly mentions nonbelievers in the same breath as the faithful. He's called his mother, Stanley Ann Dunham "the last of the great secular humanists." And he's seen first-hand the deeply held values humanism can instill.

The Republican party doesn't have a corner on the values market.

I'm afraid that none of the candidates of either party will continue his practice of giving equal time to the godless.

And it may be a long time in this "exceptional" religious country before we see the same.
Posted by Unknown at 11:54 AM