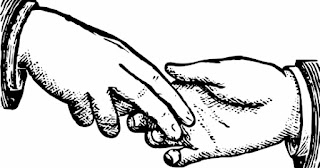 I thought I knew what my pulmonologist meant when he asked me if I was wearing my colorful tie-dyed blouse for Easter. But my sleep-addled brain couldn't come up with a response. I guess you could say it was a godless hour.

He elaborated by explaining that he was wondering if I was deliberately dressing like an Easter egg, which is what I thought he meant. (It was obviously meant to be a pleasantry and was by no means an insult.)

In these situations, I'm in the habit of mentioning my Jewishness to get out of of explaining my atheism (and possibly causing a contentious scene). I said, "I'm of Jewish heritage." I had meant to merely inform him of one of the main reason why I wouldn't feel moved to dress for Easter.

But he picked up something else in my statement that's reflexive for me. I didn't say that I was Jewish, only that it was my heritage,

"I am of Christian heritage, as you say," he replied.

I smiled and said, "Keith is one too."

Later that day, I realized he had given me the gift of a SecSpec post. I'll have to thank him when I see he next.

I deliberately left out many identifying details because godlessness is still largely a negative in deeply religious America, as I detail in the post.
Posted by Unknown at 1:22 PM