A rocky recovery at a stony park

On our second visit to the stunning and strenuous Rocky Peak Park, we made like our Cro-Magnon ancestors by dining in a rock shelter. Just as they would've eaten their bagels. The rainstorm we were trying to avoid by hiking on Saturday
caught us unprepared on Saturday. 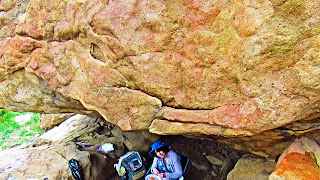 Rocky Peak is extremely steep and the path is sometimes treacherous. It's so difficult that it's even hard on Keith's knees.

Still, I found that I was able to ascend the park's heights more easily than I could just a month prior. It was gratifying to note that my hard work at rehabbing was paying off.

After I had basked in the freedom of having the wind cave to ourselves by exploring the depths I could reach safely (see gif below), we stopped for a picnic. As it turned out, we had lucked upon an open rock shelter just before it began to rain.

It was a good thing we had left the cave because the path out of it would've become a Slip'N Slide. Dry, if not warm, we waited out the rain in our open-plan cave.


Unfortunately, to avoid the slippery slope of descended the path in the mud, we were forced to head back after our picnic, instead of heading deeper into to park, as we had planned. After all, last time, I got cocky and fell down on the descent, skinning my knee. And the ground was mostly dry.

But I'm sure the wildflowers already peppering the park appreciated the precipitation (say that ten times fast.)

See Tumblrs for more pics, including the wildflowers.

And here I was struggling to my feet inside the wind cave on this trip. It's a measure of how difficult my recovery has been--from the strokes, coma, and the previous dermatomyositis muscle damage--that even the ability to stand up from the ground using only a low rock as leverage is still something to celebrate.