SfMCR: The final battle to speak 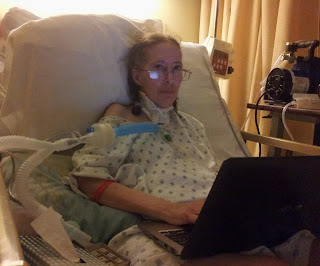 In my coma-dream, suctioning was represented as being immersed in a tank filled with science fiction-inspired oxygen-permeated gel, which I could barely suck into my airways. Once awake, it felt like my lungs were being sucked out with a vacuum. Still, the plugs in my lungs were getting so bad that I kept having to give in and ask to be suctioned.

But suffering through the waterboarding-like suctioning wasn't the worst travail I was facing.

The morning after my breathing crisis caused by the plugs (see SfMCR: Struggling to breathe because of my trach), Ricardo came to my bed and said, "We're going to remove your speaking valve."

As if a dam had burst, tears instantly poured forth. "Please don't." I interpreted that as meaning they were going to remove it permanently, silencing me once again. "I need it!"

"But we have to. We have no choice. The valve is what's causing the plugs to form."*

"Isn't there something else we can do? I have to be able to speak," I sniffled.

"If we keep it in, it's going to delay your recovery. Don't you want to get better?"

I paused to think of a way out of this. Suddenly, a solution popped into my mind, "What if I let you take it out between visits?" My loved ones visited me in regular shifts, and that's when I most needed to communicate well the most.

He looked at me a minute, and said, "We can try that." Ricardo didn't look enthused. "But if you continue with the plugs, we're going to have to take it out."

And thus, when my visitors arrived, I would ring for an RT to reinsert my Passy-Muir valve, and when they left, I would signal again for the valve to be removed.

In between, I had to do my best to communicate with medical personnel using leak talking, which is as difficult to understand as it is to produce.

This was complicated by my warp-speed speaking style, which is related to my ADHD. Try as I might, I just couldn't force myself to slow down my speech or break my comments into shorter utterances. The best I could manage was to reduce the speed to subsonic.

This was a particular problem when trying to communicate with physical and occupational therapists because doing the exercises sapped me of precious breath.

Still, it was worth it to be able to continue speaking normally with my loved ones.

I was on powerful (and painful) intravenous antibiotics. Every time the younger nurse administered it to me, I had to fight back tears from the searing pain. The older, more experienced, nurse knew how to slowly feed the antibiotic into the catheter so it didn't hurt as badly.

But the excruciating injections paid off. Before long, I tested free of MRSA, and I wasn't an untouchable anymore.

A couple of weeks later, I no longer needed the speaking valve. Ricardo finally removed my trach.

As he was taking it out, Ricardo said he had known I was ready to have it out for some time. Later that day, Joseph broke into a big smile when he saw me without the trach. He told me that he could always tell when patients are ready for decannulation, and he had known that I was from the start. That's why, when it looked like he would be leaving Country Villa Sheraton, he warned me of Ricardo's excessive caution and advised to keep pushing for further weaning.
If I had been weaned faster, I wouldn't have needed the speaking valve for nearly as long, and most of this frustrating saga never would've occurred.**


*As I said in my last post, the folks at Passy-Muir, makers of the talking and eating valve, tell me that if my ventilator had been properly humidified, it would've prevented the formation of plugs. I will delve further into this subject in the next installment in this Scenes from My Coma Recovery series. Here is Part One, Part Two, Part Three, and a related SfMCR: Gaining the Power of the Pen.

**On the other hand, I also wouldn't have sold the essay I wrote about the drama of repeatedly losing my ability to speak. "Voiceless" will appear in Kaleidoscope, a semi-annual online literary magazine about disability, in either in July of 2017 or January, 2018. I will post a link to the essay when it comes out, so watch this space...eventually.