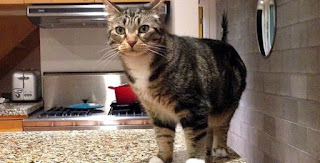 I had interviewed Keith and my mom about the lying hospital chaplain I've nicknamed the Prevaricating Preacher when I first wrote about him in Coma Chameleon. But the one person I had neglected to ask about him was Joella because she isn't a nonbeliever like the other two.

I finally did so the other day, in preparation for writing "The Chaplain's Cat Logic.

Joella confirmed what I had expected, that PP had prayed for me while she was there. But as I was talking with her, I explained what Keith and my mom had told me about the cleric. I realized that he had apparently adopted cat logic after he promised Keith repeatedly that he wouldn't bother me.

In PP's mind, he didn't have to obey Keith if he wasn't there to catch him...just like a cat.

I had my hook for the SecSpec post!
Posted by Unknown at 4:26 PM