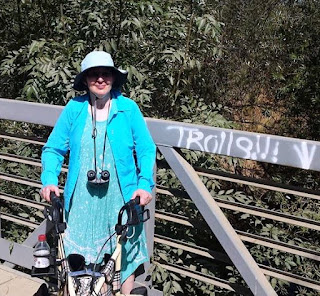 It had to happen sometime. In fact, I should've felt a bit hurt that it hasn't happened until now. I've read about the widespread phenomenon. I've even seen the noxious comments, but until today, it had never happened to me. Yes, I've finally arrived; I've drawn my first anti-woman troll. Ah, they grow up so fast....

It all started with a friendly exchange with my fellow atheist and friend Steve Watson regarding my post for the Secular Spectrum, Seeking a New Year's Evolution. I have a long-standing policy of not responding to negative comments. Someone had posted a comment with his pet theory that contradicts my contention (along with everyone else who truly understands evolution) that evolution doesn't have a direction. It sounded like he was mostly trying to promote his obviously self-published book, helpfully pointing out that it's on Amazon. Though his post wasn't that negative, he was clearly trying to pull me into a discussion where he would supposedly show off his impressive (in his mind) intellect and "brilliant" thesis.

I opted not to respond because I don't like getting into arguments where neither side could possibly be swayed to change their mind. Steve opined that I should take him on. Then he posted again to say that I was actually "taking the fight to the enemy as much as anyone."

My response self-mockingly played off the "enemy" part by saying, "My writing is indeed war by other means. ;-)"

Now, perhaps I should've made the self-mockery more evident--it was late and I was getting ready for bed--but the winking smiley is a universally understood clue. I'm sure Steve got it.

But here was the response it from my first woman-hating troll.


There are so many sarcastic ways I could take him down, but I've opted to keep to my policy (though I did downvote the post and flag it as inappropriate). By the way, I'm assuming it's a he based on the juvenile, sexist language. "Trueliguist" would no doubt love nothing more than for me to feed the troll. This has nothing to do with my comment, and everything to do with him.

Yeah, that's right, he was exhibiting so much more intelligence in his comment--without a hint of anger or bitterness. And his clever use of the term "lesbo skank" showed that he was indeed a true linguist.