The LA County Arboretum is enormous, filled with a huge variety of exotic trees and plants. Peafowl roam the grounds, imported by a rich former owner, Lucky Baldwin in 1880. Hummingbirds, Canada geese, and other local wildlife take advantage of the Arboretum's lakes and abundant flowers. It's huge expanse always makes for a beautiful and tiring walk.

Keith told his mom as we walked back from the relocated 1890 Santa Anita Depot, which is now a period museum (see Tumblrs for pics), how exhausting it was to push me up the hill on the way back in my wheelchair. He compared it to the Bataan Death March.

Those days are long gone. We walked almost two miles, and I could've walked further. I climbed the 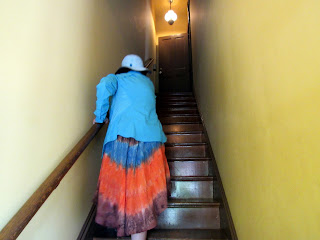 steep stairs to the living quarters of the depot with relative ease. On our first visit, on my birthday last April, I clung to the banister for dear life.
Here are two photos taken on my first walk at the Arboretum on 1/4/14. 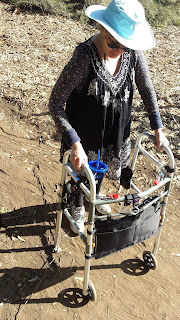 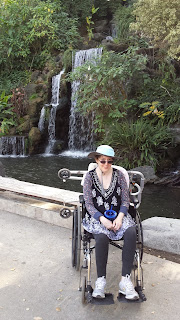 And one of me walking the opposite way at a pedestrian and (that day) peafowl crossing.