It's gotten so that stair-climbing doesn't always merit a photo on our rehab walks/hikes. Ho hum, Stephanie climbed another flight of stairs.

On our first visit to the Conejo Valley Botanic Garden in early January, 2015, I very carefully made my way over the steps inside the garden. Not long before that, it would've been impossible for me. The steep stairs going up the garden were hard enough, even though they have rails.

I couldn't have managed the stairs in the picture below it weren't for my then-new hiking sticks. Now I can take steps far more easily. Still, I wouldn't have been able to traverse the broken rocks in the pic above without them.

Keith scampered along the boulders like a kid, but I stayed below, carefully making my way along the rubley ground. The resulting photo op can be found in my Tumblr, as can a photo of the great blue heron who settled down by the creek soon before we reached the outcropping.

You can't immerse yourself in nature if you can't make your way through it. 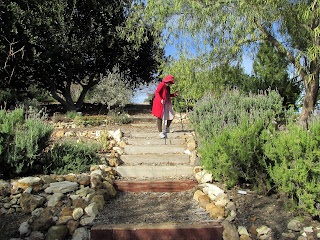 We wisely decided to leave behind the wheelchair on our first trip to the botanic garden. 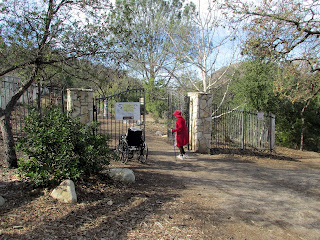