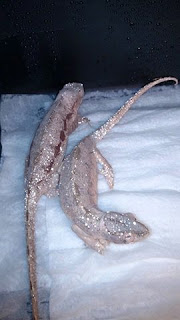 Now that I'm a contributing writer for The Secular Spectrum, I have a new outlet for my skeptical and humanist writing. Therefore, I feel free to write more directly about my recovery again in Coma Chameleon again. This blog is subtitled, My Recovery Chronicles, after all. This post, however, is also a continuation of some of my recent subject matter.Yes, that's right, my fellow coma victim and experiencer, Eben Alexander.

A few months ago, I finally received my hospital records from my 6-week coma in 2013, after being mistakenly given the records from my two-week 2014 hospitalization. Both were due to Legionnaires' disease, caused by immunosuppression. Thanks, prednisone.

The 2447 pages of the PDF (I received it on CD) is a treasure trove of details, sandwiched between mountains of repetitive information. I don't have the space to go into all the information, and I've only skimmed through parts of it. But I did learn one juicy tidbit. I knew that my lungs and kidneys were failing, but apparently my liver wanted to get into the act, as well. When I mentioned this, Keith joked that my spleen was doing fine, as was my appendix. Everything else was going south. My impression is that the liver problems weren't as severe as the other organ failures, a speculation my neurologist later confirmed. Otherwise, I would've been given a Charlson Comorbity Scale of 3 instead of 2. Think of what it would've done for the miracle-believers if I had managed to survive a score the maximum of six out of the twenty-two frequently fatal conditions that make up the scale.

In Proof of Heaven, Eben Alexander actually implies that the very rarity of E.coli meningitis in an adult is evidence that God chose him as His Special Messenger. After all, as a neurosurgeon, he was the perfect emissary to the disbelieving medical and scientific community. Yeah, right. Wouldn't neuroscientist Sam Harris have been even better? I suppose his argument is that God chose a rare condition as a sign that this was an act of God. Isn't he special? According the famous Esquire expose, Alexander has a reputation of arrogance. And he hides it so well.

At any rate, he seems convinced that the severity of his illness is another sign of God's hand. But as someone who was at least as close to death, you'll have to forgive me for not being impressed. My doctors were every bit as convinced that my death was imminent. I'll take one life-threatening bacterial infection--in my case, Legionnaires' disease--and raise him multiple strokes on both sides of my brain, severe sepsis, lung, kidney, and liver failure, as well as another potentially fatal bacterial infection, listeriosis. And compared to his measly seven days of coma, I was comatose for six weeks.

Take that, Eben Alexander, messiah to the scientific world.