Lost in the rainbow 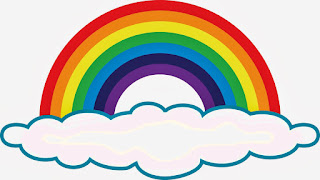 In the true-believing International Association of Near Death Studies (IANDS), near-death experience researcher Robert Mays writes that Phyllis and Betty Alexander (respectively Eben Alexander's sister and mother), insist that they saw the "perfect rainbow" supposedly heralding Eben's awakening. We're in the midst of a record drought here in California, so there were no rainbows to be seen in during my awakening. And, indeed, as Luke Dittrich showed in his famous Esquire expose of Eben Alexander, according to the head NOAA meteorologist for the region, it was impossible in Alexander's case, as well.

Mays argues that Dittrich never interviewed Phyllis and Betty to hear their corroboration of the rainbow story in Proof of Heaven. He uses this as an example of the alleged hatchet job done to Alexander's reputation. But there is another explanation.

Both may be true.

The recorded weather on the day of Alexander's awakening indicates that a rainbow couldn't have appeared. Mays' sketchy excuse is that there are many causes of rainbows. Leprechauns, maybe? But just because the usual trigger for rainbows--it's baked right into the name--couldn't have occurred, that doesn't mean Alexander's sister and mother are lying. They may well have conflated memories. Or, the rainbow may have been imprinted on their memories after the fact by the very suggestion that it had occurred.

The pioneering studies of Dr. Elizabeth Loftus, as well as many other researchers, have shown that simple suggestion can implant memories that people will later swear actually happened to them. The most famous example of the misinformation effect is of course Dr. Loftus' groundbreaking lost in the mall study. 24 participants were given four stories from their childhoods and asked to flesh them out with additional details. Unbeknownst to them, one of the stories was false--the tale of getting lost in the mall at the age of 5. When they were later told that one story was false and asked to pick which one, five of the participants chose a true story. These result have remained consistent through many different experiments. Generally, 25-30 percent of subjects will pick a true story over the planted one.

Add to that the brain's natural habit of conflating events, and it's entirely possible that the Alexanders honestly believe they saw a rainbow. Perhaps they saw a rainbow a week or two after Eben's awakening, and they commented that this was a message from God. Later, they recalled the rainbow as happening just before he woke up. Or maybe Eben misremembered something Phyllis said about seeing a rainbow, and the very act of Eben writing about it set the vision of the rainbow into her's and her mother's memories. I've done the very same thing with my mother. Like Loftus' subjects, her new memory wasn't as definitive and detailed as it would've been for a true memory. But the fact remains that the very act of imagining events can make them seem real, especially upon repetition. Have you ever found yourself "remembering" something that happened, only to realize the event actually occurred in a dream? I certainly have.

Memories are not Memorex moments; they're more like Play-Doh. Certainly, the human brain is a marvelous organ. It provides nightly entertainment shows for us, and for some people, dreams that last for days on end or even weeks. Indeed, there are numerous aspects of Alexander's NDE that remind me of my own coma-dream, and I will detail them in Wednesday's blog.
Posted by Unknown at 8:32 AM