The Three Faces of Steph


Google's new photo-storing service employs facial recognition algorithms to lump photos of people together automatically. It's a work in progress. Indeed, like something out of science fiction, it thinks I'm three people.

The first Stephanie consists of my BC photos (Before Coma). The second Stephanie is comprised of my coma and nursing home pics. The final me is the current one; all of those pictures were taken after I came back from the nursing home.

Now, you might think that it's only gauging this based on my hair, since it went from long to braided to short. But perhaps Google Photos is onto something deeper.

Stephanie One had only recently been diagnosed with dermatomyositis. Though her shoulders were still weak from the DM proximal muscle damage, she was reluctant to cut her long, thick, curly hair short, even though it was so hard to wash and style, because it looked really nice and she got many compliments on it. Though the muscle damage in her hips, buttocks, and legs had improved considerably, she was pleased that her dermatologist put her on a significantly increased dose of prednisone, since the higher dose was clearly making her stronger, and she was afraid that she was still too weak to walk through the ruins of Sicily that beckoned to her. Even so, when Keith and Stephanie arrived in Sicily, her legs kept collapsing as she attempted to board the steep steps on tourist buses and the Mt. Etna funicular. She had also lost so much weight during her illness that she needed the prednisone to help her regain the weight she had lost from her already skinny frame. She had a license to make Sicily an all-you-can-eat buffet!

But the strong prednisone dose weakened Stephanie One's immune system so seriously that she caught Legionnaires' disease and listeria while in Sicily. The gastro-intestinal symptoms of the listeriosis presented themselves immediately and are best left to the imagination. But the Legionnaires' disease triggered a severe case of sepsis, which dropped her blood pressure so low that she experience a series of strokes on both sides of her brain, causing her to fall into a six-week coma. Thus, she morphed into Stephanie 2.0, who came about as close to dying as you can get without actually "passing over," as believers like to say. She lost further weight on the liquid diet being pumped into her system. When she awoke, it was many weeks before she was allowed to eat solid food again. Her tangle-prone hair was repeatedly braided and rebraided during this period to keep it looking neat. Brushing is out of the question when you can barely use your arms or even lift your head.

When Stephanie Clone Three got home from the nursing home, she was forced to cut her now-scraggly hair short because she had lost so much of it while she was still Stephanie, the Sequel, due to all the detangling and rebraiding, plus weakened hair from the respiratory distress suffered during the coma.

Keith put her on a high-calorie diet because she was starting to look like a Holocaust victim. That worked all too well, as the notorious weight-gain side-effect of prednisone finally kicked in. Her normally thin, angular face rounded and her stomach began protruding--yet more prednisone side effects, aided by the weight gain. But her hair regained its naturally unnatural thickness. During this time, her nonfiction writing about her recovery began to be accepted by major publications. 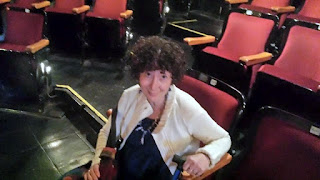 Who will Stephanie Mark Four be? Well, the difference may be too subtle for Google Photos to detect, but finally free of the curse of prednisone, her weight edges ever downward as her face continues to shed the round "moon face" caused by the corticosteroid. Ditto her "pregnant belly," which birthed no joy. But those had already shrunk considerably, anyway. Stephanie Three is finally starting to resemble Stephanie Prime--the "normal" one, relatively speaking, before even the DM.

Stephanie Three is expecting her feature article to appear any day now in Skeptical Inquirer. She's also finished her latest essay for the humanist market, "Sympathy for the Devil-Believers," and she's about to send it out. Her essay, "Without a Prayer of a Chance," is tentatively scheduled for the October/November issue of Free Inquiry. So, even though Stephanie Clone Four might not look that different from her previous iteration, by the time she appears, the story of all four Stephanies will be finally out. And then there's the new essay about her DM, not to mention the memoir she's now preparing to write....
Posted by Unknown at 5:09 PM