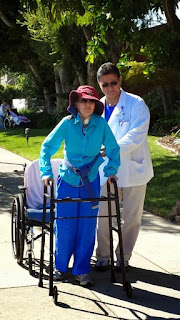 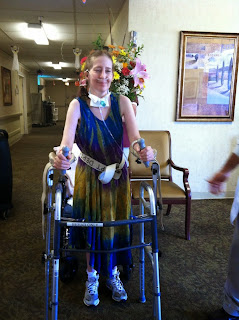 Actually, it was only a day, okay, a half-hour or so at the nursing home. But returning to Country Villa Sheraton even for that long unleashed a flood of memories.

I climbed up the steps that I had once struggled to walk past on my first outside walk and entered the lobby. As I waited for the receptionist to get off the phone, I sat down and watched the open therapy room door. I didn't see any familiar faces, and I worried that I had waited too long for this trek.

I had returned to the nursing home to try to record the names of the people who had most prominently figured into my recovery, excluding the ones I still remembered. But I'm terrible with names, and at the time when I would've still remembered them, when I first got back home, I was too busy struggling to get up from the couch and walk to the bathroom to think about a future memoir. Indeed, it wasn't until I could ease up somewhat on my grueling physical therapy exercises that I was able to begin devoting some of my time and energy into writing about my experiences.

The receptionist told me to go wherever I needed to ask questions, so I walked past the area where I had taken my first short indoor walk toward the receptionist's desk and entered the so-called gym. I again saw no one I remembered until I passed the door and looked over to the end of a long table against the side wall. Yes! Apparently, there had recently been a large turnover, but at least Karen was still there. She remembered many of the names I sought, one of which was in fact hers.

She showed me the collage of my walking pictures that we had included with the gift basket of food Keith and I had delivered on Christmas Eve in 2013. It showed my progress from coma to nursing home to our early rehab walks. Someone had posted it inside an open cupboard. I said that I hoped it provided inspiration to some of the patients. Karen said she had just been looking at the collage.

After I had gotten most of the names I needed and thanked Karen, I headed out to see if I could find any nurses I remembered, as well. But I returned soon after when I realized I wanted to know the name of a certain Alzheimer's patient I had often seen in the gym. Karen couldn't remember her, but I said that was okay because I had already referred to her one of my essays ("Voiceless") without using her name, and I could do the same in my memoir.

This sweet woman was particularly memorable because of the small baby dolls she doted on as if they were real. Angel--thank you for that name, Karen!--had given the woman her first doll because he thought it would help her to feel more engaged. It was more successful than he had even imagined. He and Arin--again, thanks!--would incorporate "her babies" into her physical therapy sessions, tying them to her walker and treating them like they were real. [Well, okay, if they had been real babies, tying them to a moving walker with stretchy exercise bands would've been frowned upon.] I've often wondered about her since then. I always thought she must have been a very kind and nurturing woman before Alzheimer's began stealing away her mind.

I never did find a nurse I remembered, though Joella, who was sitting in the waiting room, had. But I did see that woman with Alzheimer's. For the first time, I saw her without a doll in her hands to stroke. The tender, happy expression had drained from her face. She muttered something business-sounding about forms to herself as I passed. I didn't ask her what her name was because I wasn't sure if she even remembered it. Even worse, that could've upset her badly.

I couldn't help wondering if the loss of Angel--who had moved on from the nursing home--and the dolls he gave her had contributed to that marked change in her demeanor. From an overheard conversation between Angel and Arin, I know that she had a son who was concerned about her treatment by the physical therapists. He thought they didn't treat her sensitively enough. On the contrary, I saw nothing but nurturing and kindness from the assistant physical therapists regarding her care.

So, while she clearly has a loving son, but he's not able to be with her as much as the therapists are. Though of course Alzheimer's is a degenerative disease, I can't help wondering if the loss of those dolls and the dedicated physical therapists who had encouraged her might have had a detrimental effect. They're relatively low paid, and you can't blame them for moving on. But it still makes me feel like buying some baby dolls and giving them to her...assuming it's not too late. But, really, no one can do anything for her now.
Posted by Unknown at 6:59 PM