Hiking where the Chumash gathered

Oakbrook Regional Park was occupied by Chumash Indians as long ago as 12,000 years ago. The appeal for the Chumash and us was the hundreds--probably thousands when they were there--of magnificent oaks.We love their sculptural, twisty-turny trunks. The Chumash were undoubtedly drawn by the acorns, a dietary staple for them, as well by the area's seasonal creek.

The Chumash Indian Museum manages the park, and they also built a recreated Chumash village, 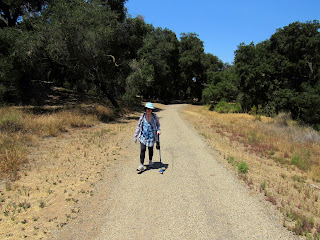 which looks like it receives a regular stream of schoolchildren on outings. On our first outing to the park, I brought both my hiking sticks and my Hurrycane. On the way up, I used the cane, and as an experiment, on the way back I used the sticks.

Even so, I was so tired that I lunged for the first 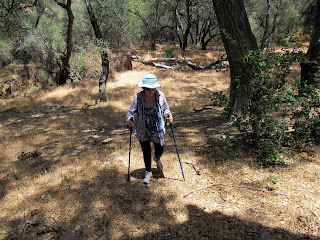 bench we found. This time, it was Joella's turn to lust for the chance to rest. I've gotten so strong that I barely noticed the incline that had so exhausted me on the first visit. But it didn't escape Joella's notice

But we knew she would love the park's magnificent oaks, and we were right.

As usual, after the portion of our walk with Joella and a nice picnic, we headed off to a more vigorous hike. There we hiked in an oak forest that looked like it had barely been altered since the Chumash roamed it. Well, besides the road, of course.

You could almost imagine the Chumash gathering the acorns and grinding them into a mash that they would leach of its tannins and turn into a flour.

In fact, don't those flat rocks look like grinding rocks? No, it's probably our imagination running away with us. Perhaps they were caused by erosion instead.

But I couldn't get the rock out of my mind. When we returned to Joella, I slipped into the Chumash Indian Museum to ask an employee about the rocks.

Yes, she told me. Those holes were made by the Chumash. 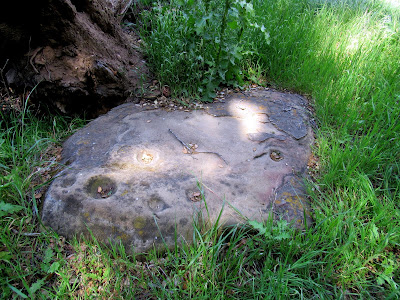 All told, we hiked 2.74 miles though the former home of the Chumash, who gathering acorns blissfully unaware that they would be one day shunted off their land into reservations.

The Chumash now own a casino, while a small museum pays tribute to their nearly forgotten culture.

On that sad note, here's a bonus pic of a huge, burned-out tree smack dab in the middle of the parking lot. It's hollowed out, yet it still survives, much like the Chumash. 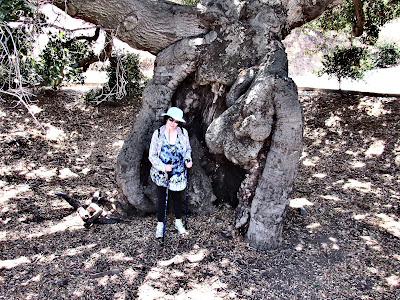