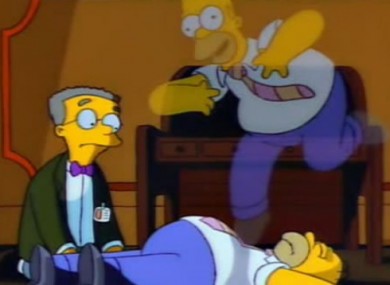 In 2008, a multi-center study called AWARE was launched by Sam Parnia, a doctor and assistant professor at SUNY Stoney Brook. The study attempted to determine if out of body experiences during cardiac arrest were real. Images were placed in operating rooms where they could only be viewed if the patient's consciousness were floating above their bodies. I will pause to give the skeptics among my readers a chance to laugh. These same skeptics will not be shocked to learn that not a single patient reported seeing the target images. The NDErs will no doubt have a laundry list of excuses and denials. Here are the results from the study, which was released in 2014.


Among 2060 CA events, 140 survivors completed stage 1 interviews, while 101 of 140 patients completed stage 2 interviews. 46% had memories with 7 major cognitive themes: fear; animals/plants; bright light; violence/persecution; deja-vu; family; recalling events post-CA and 9% had NDEs, while 2% described awareness with explicit recall of ‘seeing’ and ‘hearing’ actual events related to their resuscitation. One had a verifiable period of conscious awareness during which time cerebral function was not expected.

My take on the cases of awareness--especially the one with supposedly unexpected consciousness--is that these were likely due to a form of covert cognition, not mind-brain separation. My cerebral function was not expected either, after all. In once case the awareness was timed with an auditory signal. To me, this is not a confirmation that OBEs are real, only that the patient's brains are still functioning on some level.

This is what the study had to say:


CA [cardiac arrest] survivors commonly experience a broad range of cognitive themes, with 2% exhibiting full awareness. This supports other recent studies that have indicated consciousness may be present despite clinically undetectable consciousness. This together with fearful experiences may contribute to PTSD and other cognitive deficits post CA.

Based on my knowledge of covert cognition, I believe that many OBEs that are purported to be real because they correspond to verifiable events during the patient's resuscitation were actually a mix of covert awareness and imagination. In my coma-dream, my mind integrated many things going on around me into my dream narrative. As I described in my Skeptical Inquirer article "Covert Cognition: My So-Called Near-Death Experience," when I was being turned over in my bed to prevent bed sores, I often saw myself being flipped from outside my body. But I always started out as the person being turned before the perspective shifted and I began watching myself. That's something that frequently happens in ordinary dreams. In this case, the turning was real, but I imagined the details surrounding it.

OBEs are a real sensation for many people, however. In a study of 13,000 Europeans, 5.8 percent had experienced the phenomenon. But it's also a sensation that be stimulated electrically in the brain, as Olaf Blanke's famous experiment showed. The overwhelming evidence suggests that as doctors are frantically attempting to save their lives, these patients' mind roam free...inside their own dying bodies.
Posted by Unknown at 11:52 AM