Coping with the not-so-covertly unaware 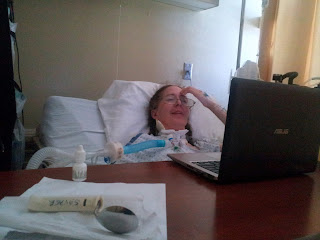 I was uncommonly annoyed by a one word comment made in an ABC news article thread about Claire Wineland's video, What It's Like To Be In A Coma.That word? Bogus. What about Claire's account was bogus to that woman? Did she think that adorable, bouncy, 18-year-old with cystic fibrosis was lying about her account of integrating things going on around her during her coma into her own version of a coma-dream? Was covert cognition too far outside of her limited mindset? Of course, it was my own experience that made me feel so outraged. I didn't respond to that woman, but I quickly clicked the down arrow to disapprove her comment.

So, I wasn't surprised that my own story would draw similar comments. As a skeptic, knowing that memory is not like a recording but a mixtape or heavily edited document, you always have to keep in mind that your memory is far from infallible. But what do you do when a fellow skeptic challenges your experience using the same logic? Yes, science cannot credit one person's experience because it's anecdotal. But we all have to proceed through our lives as if our memories are at least somewhat reliable. Otherwise, we would be paralyzed with inaction. A true skeptic, however, will acknowledge when their memory is proven wrong, instead of doubling-down like so many people do.

So far, I haven't received much of this kind of logical challenge to my story, however. Some objections I've gotten to my account of my coma experience in my VICE interview and my Skeptical Inquirer article "Covert Cognition: My So-Called Near-Death Experience" were clearly not from skeptics, even though that's how they self-identify. Perhaps they rejected my coma experience because it was too much outside their understanding, like the woman in the news article comment thread. Indeed, one woman who had had no memory of the three days she spent in a coma when she was 12 opined, "Didn't experience anything so stupid as this bitch's overactive imagination."

Okay, I admit it. I do have an overactive imagination. When did that become a bad thing? I am a fiction writer, after all. I'll let you decide if I'm a bitch. I opted not to respond to her, but since this was in a thread posted by Skeptical Inquirer's Facebook page, which was sharing my VICE interview, a bunch of skeptics came to the rescue. They correctly surmised that she hadn't read the article. In fact, as it turned out, she thought that I was recounting a visit to Heaven during my NDE. There's no point in bothering to read the article before spewing venom online, right? So, her comment was not about my actual account at all.

However, it's hard to know what was going on in the mind of the person who said, "Does anyone really believe this shit?" A skeptic tried to draw out his explanation in a long thread, starting with, "What, specifically, don't you believe?" But a second poster probably called it when she said, "Another commenter who seemingly didn't read the article."

A third man's objection I've mentioned before. On the surface, he was being a skeptic when he said, "One person's comatose recollection does NOT a true story make." But in another thread he revealed that his son had been in a coma for fourteen years, and he hoped his son wasn't covertly aware.

Most skeptics who have actually read my article seem to be accepting my anecdotal personal recollections. Why? In my article, I presented the science of covert cognition. In didn't say that it's real because of my experience, only that this was how I experienced it. A good skeptic should question anecdotal accounts, but not reject out of hand covert cognition because it's outside their conception of the vegetative mind. The woman commenting on the Claire Wineland article wasn't being a true skeptic because a skeptic would've laid out her objections instead of flatly labeling Claire's story as bogus.

We all (at least those who aren't jerks) have to operate on the assumption that most people are giving the best, most honest recollections their faulty, non-Memorex memories can provide. Even the stupid bitches.
Posted by Unknown at 8:55 AM