Scenes from My Coma Recovery: Of Inhuman Bandage 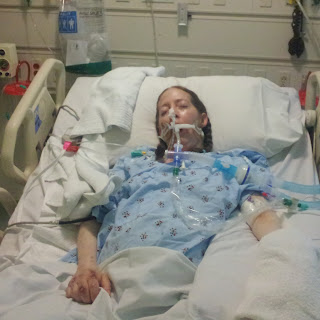 In my coma-dream, I heard my mother muttering, “This place is a hellhole. What a shithole,” and the like, over and over again. I also dreamed of being turned over by a hulking attendant, as well as having my private parts cleaned so roughly it hurt. It got so bad that I eventually refused to be cleaned anymore. But of course, the cleaning continued because my act of rebellion had occurred in my dream world.

Keith doesn’t think the nursing home I had recently been transferred to, All Saints, was all that bad. Though my mother’s complaints may have been excessive, All Saints did have a slightly dingy, down-market air. It looked like the second-choice nursing home it was.

Admittedly, I still had some problems with over-rough cleaning at Country Villa Sheraton because my skin is really sensitive to abrasion. At least then I could tell the CNAs to be gentler. But one particular event that occurred a day or two after my awakening makes me think that All Saints was less than careful about patient comfort.

Ever since my dermatomyositis was in full progression, I had suffered from painful sores on my hands, arms, and thighs. When I awoke, they had healed everywhere but on my hands. You can see the sores in the cropped coma picture above.

I will give All Saints some credit because the sores received indifferent treatment in both the hospital and at Country Villa. All Saints at least gave them regular care. Joella has said that the sores improved, and no wonder. The treatments made it into my coma-dream as a soothing warm bath that periodically flowed over my hands.  I found it very pleasant, and I looked forward to it. But after I awoke, the treatment led to an incident that was far from enjoyable.

The procedure began as usual. The pungent smell of iodine filled the air as the nurse poured liquid paraffin over my hands, which lay in a plastic basin.  At first it felt a little too hot, but the paraffin soon cooled to a relaxingly warmth. It was a lot like a spa treatment, actually. The young nurse next bound my hands in gauze. It wasn’t until the she had left that I realized she had wrapped the bandage way too tight around my right hand.

My thumb was pulled straight against my hand, as a cop might do while handcuffing your arms behind your back. Pain shot through my thumb in waves. Soon, it was simultaneously numb and throbbing with lightening bolts of pain. Before long, my other fingers joined the chorus, cupped and tightly bound to their sisters as they screamed in agony.

My loved ones had been continuing their rotating visit shifts after the awakening. Joella was there with me as my bondage drama unfolded. I couldn’t speak due to my tracheostomy, so I exaggeratingly mouthed, “Too tight! Too tight! Hurts! Hurts!” After a few tries, she understood what I was trying to say. She tried to loosen the bandage, but it was too firmly tied.

I tried to work my left index finger in there, but I could barely move my hands even when unbound. The mummy-like binding wouldn’t budge.

“Help me!” I begged, crying from pain and desperation.

She tried again. And again.

“Nurse!” I mouthed, mimicking scissors with my left hand, for good measure.

Joella went to find a nurse. When she returned, she said, “Sorry, they said they would have to re-treat the hand. You’ll have to wait until the next treatment.”

That would’ve been several hours away. I didn’t care if my hand would be without treatment—I was in excruciating pain! And, I was worried about nerve damage. It was that bad. I wormed the cold edge of a knobby IV stand connector under the bandage to create some leeway, pulling away as best I could. It wasn’t long before I had to drop my enfeebled hands again. Then, I slipped the metal under the gauze again and continued working it. The cycle repeated. Eventually, I managed to create a very slight easing in pressure. But the pain continued to grow.

Every few minutes, I would beg for Joella to do something. “Please!” I would mouth, my hands pressed together in prayer. By then, she was crying too. She went back to the nurse again, but was once more rebuffed.

I made the scissors mime again, then put my hands together. “Sorry, I can’t,” Joella said, as tears ran down her cheeks.

Joella wasn’t being hard-hearted. She was acting like the respiratory therapist she was trained to be, deferring to medical authority. By the end of her visit, we were both emotionally spent. It was clear that she was as distressed as I was. But I was also utterly exhausted from my efforts to work off or at least ease the tension of the bandage. My arms were as weak as a baby’s from the six weeks of enforced immobility.

I fixated on my mother’s arrival, as I counted the minutes. My mom does not take no for an answer, nor is she deferential to authority.  I knew she would insist that I be freed from my bondage. As soon as she showed up to relieve Joella, I mouthed, “Too tight! Too tight!”and showed her my torturously bound hand. She pulled a pair of cuticle scissors from her purse and performed the surgery herself with a few snips.

My hand remained numb for few days, but after that, the nurses applying the bandages would ask me if it was too tight before leaving. But when a bed opened up at Country Villa, I insisted on taking it.


My mom asked me if I wanted to go back to All Saints, but I shook my head so vigorously that I felt a little dizzy. I was back in the hospital at the time. But that’s another story.
Posted by Unknown at 1:59 PM