Today is P-Day: The day I took my last dose of prednisone. It feels like we should be throwing a party.

Steroid medications are a classic double-edged sword; the cure is often worse than the disease. That's not quite the case for dermatomyositis, since before the advent of prednisone the disease was often fatal. Still, my treatment has come at a high price, and I'm not talking about the cost of the medication, which is dirt cheap because it's been out of patent for so long.

The worst things prednisone did to me, hand's-down, were the multiple strokes on both sides of my brain and the six-week coma the strokes caused. The immunosuppression triggered by prednisone weakened my immune system just as we were preparing for our trip to Sicily.When my dermatologist put me on a stronger dose, and my muscles started to strengthen, prednisone seemed like a godsend. Keith almost canceled our trip after my diagnosis because he feared that I would be too weak. He wasn't far wrong. 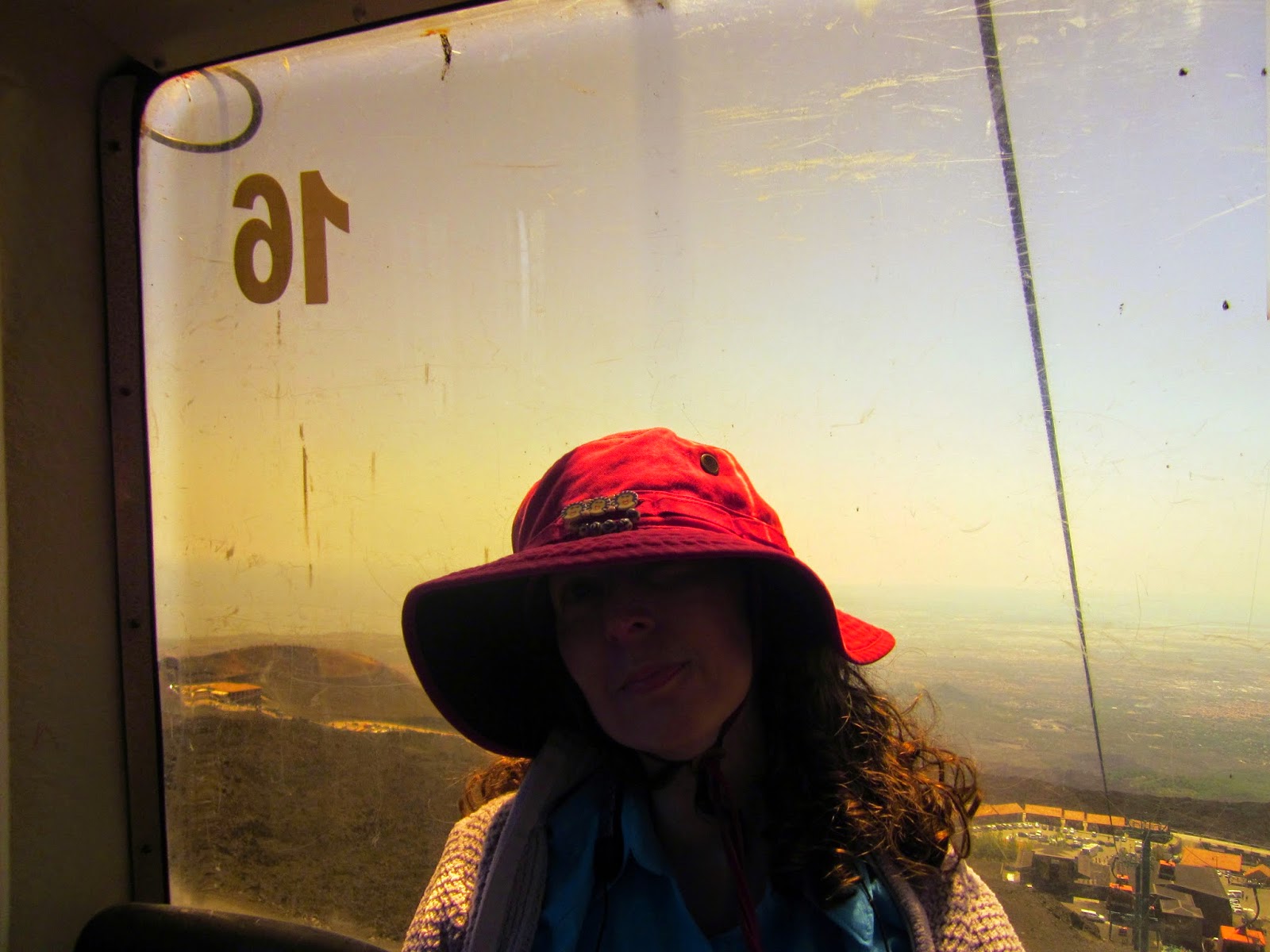 While in Sicily, I was shocked to discover how weak I still was. DM damages the proximal muscles in the legs, including the hips and buttocks. Not only did I have difficulty with stairs, but my legs would frequently go out from under me on steep steps. I would take a step and suddenly find myself collapsed on my haunches. That was a real problem when boarding and disembarking tourist buses. When I tried to board the funivia to Mt. Etna, my legs once again gave out on me. I lurched forward and hit my head on the pole in the middle of the car as the funvia continued on, heedless of my downward trajectory. On the way back, I collapsed again, and as we pulled away, we saw a guy talking into a walkie-talkie. When we reached the bottom, the car stopped to let me off. The man had obviously been calling ahead to warn the people down below. Indeed, I fell so many times on Etna Keith that joked, "We're banned for life." 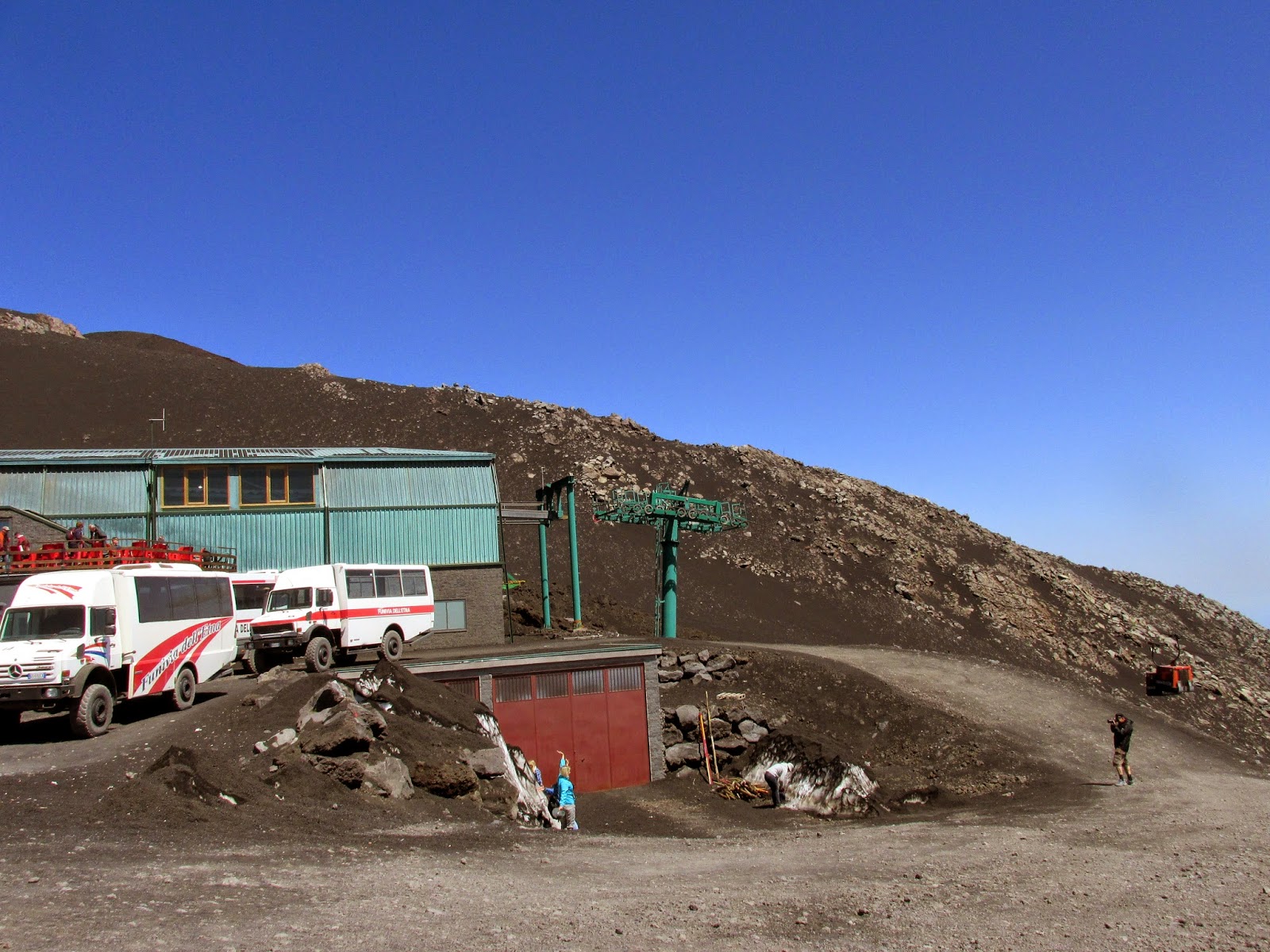 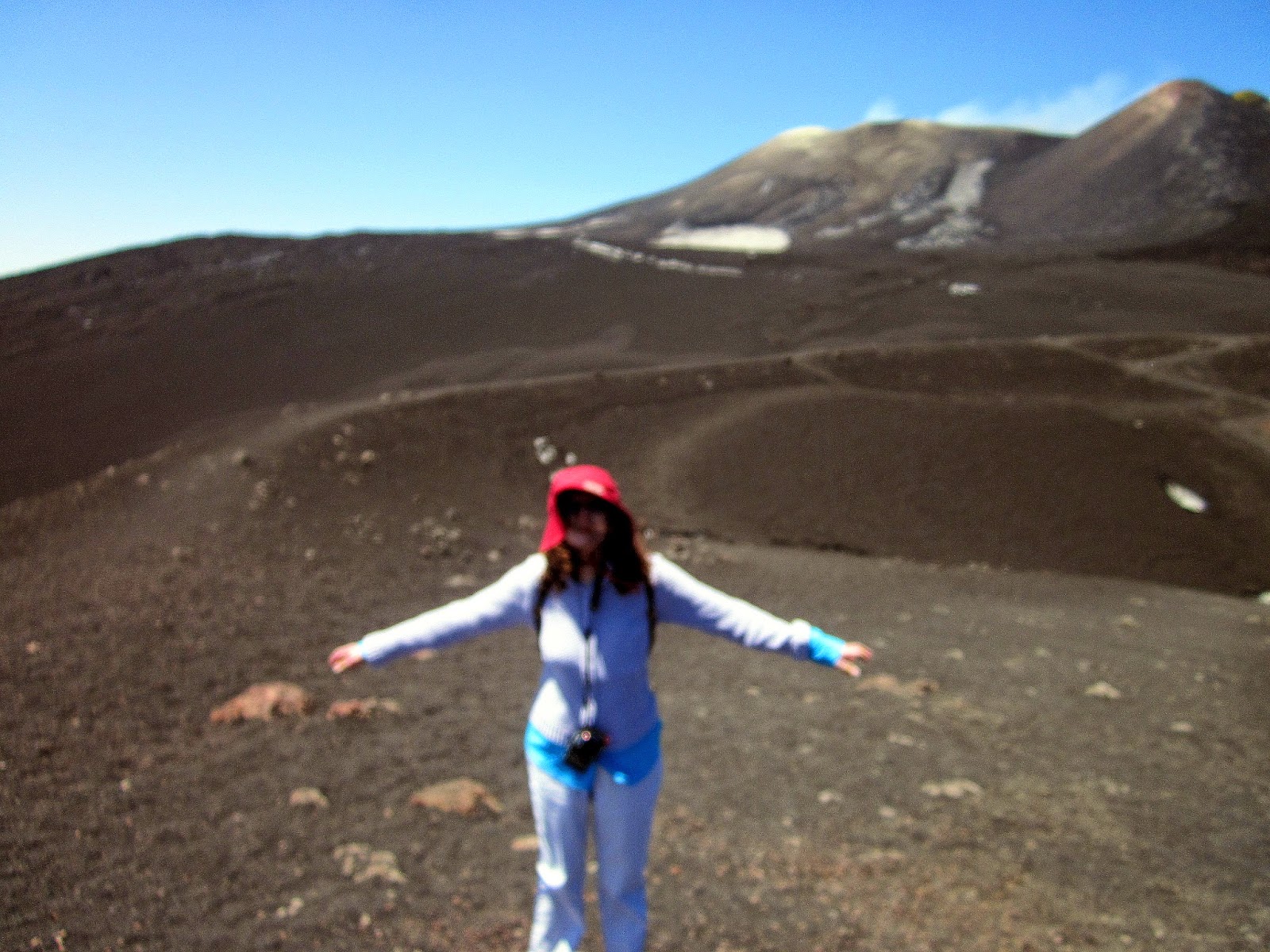 Acting as a human weather sock on Etna. It was extremely windy up there.


Even so, without the increased prednisone dose, we might not have been able to walk up the steep hills to all those wonderful ancient ruins we loved so much. There were still places that I couldn't go, but I was able to do far more than I thought I could. 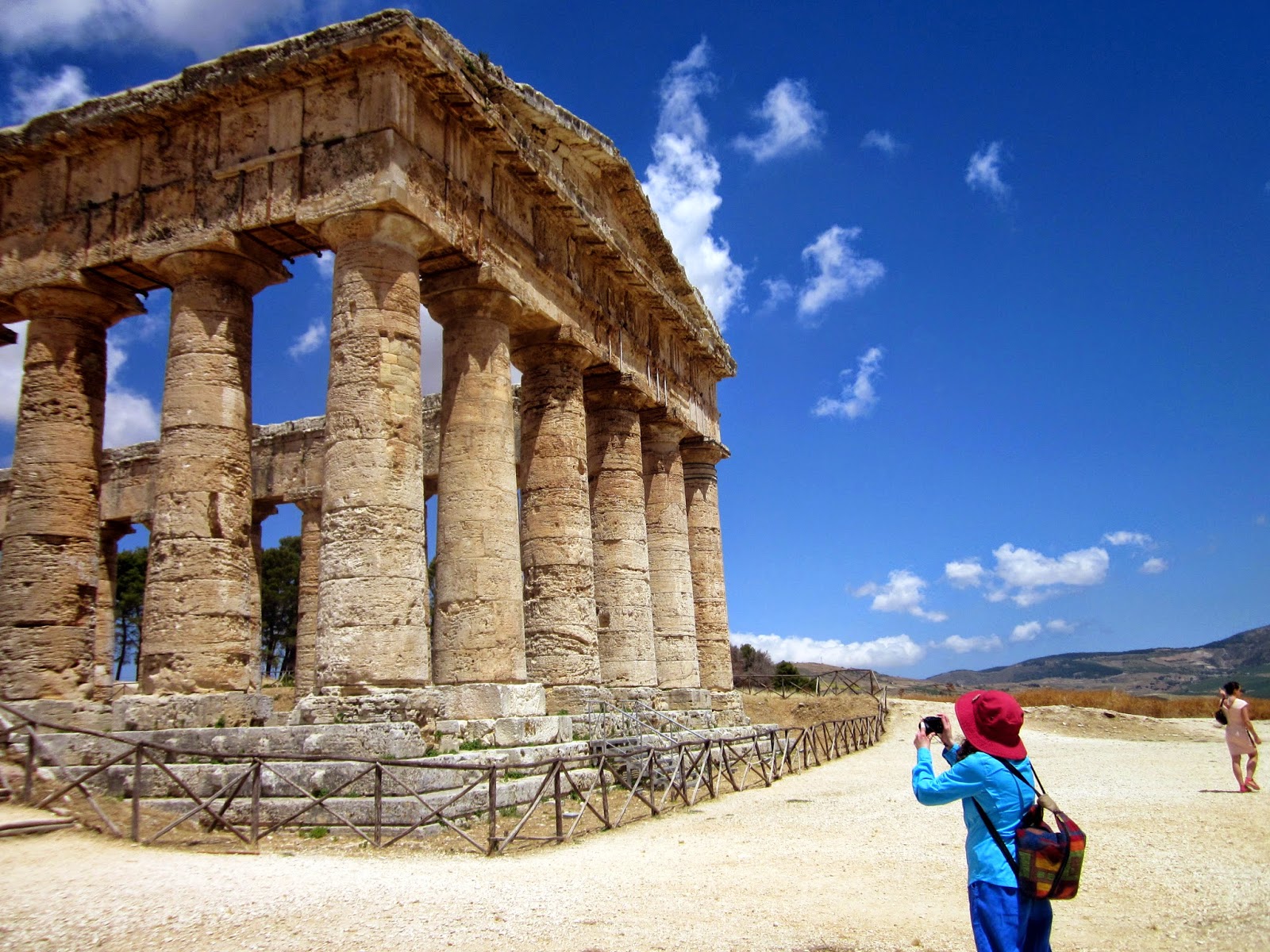 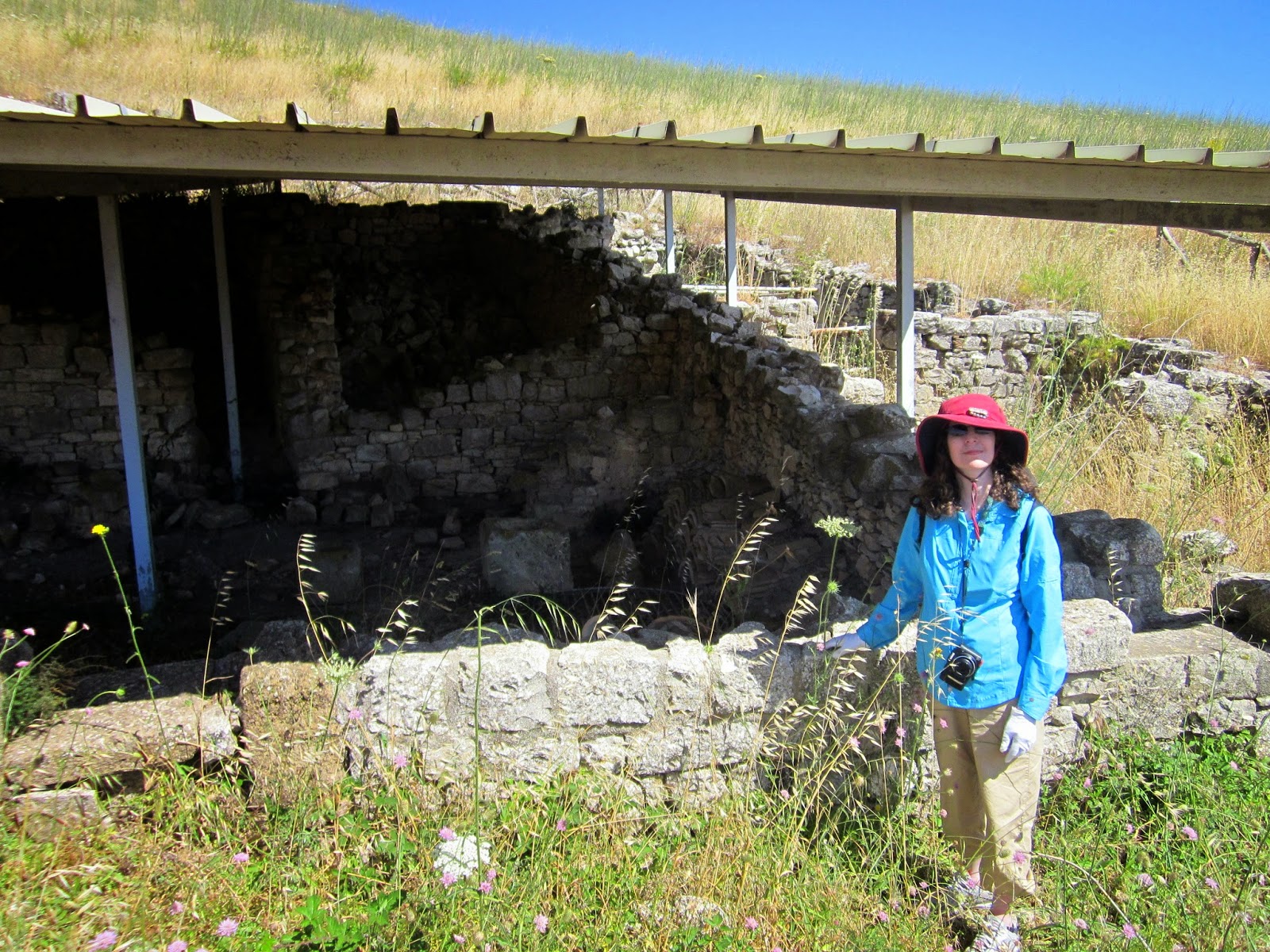 While we were staying on Etna, I developed my first symptoms of listeriosis, almost certainly caught by unpasteurized cheese I had unwittingly eaten. That should've been a warning sign, but I had never been told to watch out for immunosuppression-related illnesses.

When you read about Legionaires' disease, the first thing they often mention is that immunosuppressed travelers are among the most at risk. When I was first put on prednisone, I looked up the side effects. Among the long list--many of which I've since experienced--was a compromised immune system. But no one warned me to watch out for symptoms that would've been minor before I started my treatment.

So, when I developed a hacking cough in the waning days of our vacation, we thought nothing of it. Mussolini's Revenge, we joked. But a few days after we returned home we learned that it wasn't such a laughing matter. After I had spent all day in bed, Joella realized something was wrong and she called Keith. He rushed home from work and found me still lying in bed, unable to dress myself. When he asked me why I hadn't turned on the air conditioner, I said, "I like the heat." It was 105 that day, and I hate the heat.

Keith dressed me and rushed me to the hospital. It was there that I went into septic shock, which made my blood pressure plummet, causing extensive watershed-area stroke damage in my brain and putting me into a deep coma. Watershed damage tends to occur in the less vital areas of the brain and it frequently bounces back better than other types of damage. That's why my "profound brain damage" caused so few serious effects.

Six weeks later, when I awoke from the coma, I discovered that my dermatomyositis had gone into remission.

Flash forward several months. I was close to finishing stepping down from the prednisone when I starting experiencing severe withdrawal symptoms. We were returning from a rehab walk at the Los Angeles County Arboretum when I suddenly puked up the lunch I had eaten at the Peacock Cafe. These severe episodes continued until my rheumatologist slowed down my step-down schedule. I'm finally at that end-point again, this time without any withdrawal symptoms.

The list of all the side-effects the prednisone caused me would fill several blog posts. Some of them, like my osteoporosis, are serious and lasting, but as of tomorrow, I will be able to wave bye-bye to prednisone.

Good riddance to bad (but necessary) medications!
Posted by Unknown at 5:42 PM