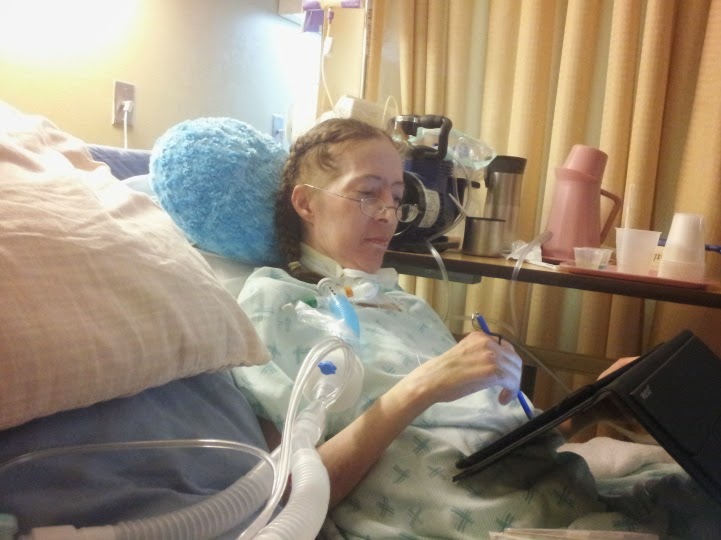 The pillows by my side and under my head were used to improve my comfort and to prop me up while I was eating because I wasn't yet strong enough to sit up or raise my head on my own.

My illness and recovery have given me a kind of sneak-preview of what it's like to be elderly. Perhaps I had it a little easier because my caretakers at the nursing home knew that I was completely aware. In fact, I was a bit of a pain in the ass, especially at first, since I knew what I needed to make myself comfortable, though I had trouble communicating that thanks to the tracheostomy tube in my throat. I even had difficulty telling my caretakers that I wanted a pencil and paper so I could write down my wishes. That was difficult enough once I got them, since I didn't have good control of my hands after the coma. To write posts on Friends of the Mountain Dulcimer using the Kindle Fire Keith bought me to use in the nursing home, I had to cradle the stylus in my hand like I had severe arthritis,

The certified nursing assistants (CNAs) had an especially difficult time in my room because there was another patient about my age who also couldn't speak due to a trach. I don't know Vilma's story, but I was told that she had a similar experience to mine, including the coma and seemingly miraculous recovery. Apparently, she and I were among the top three recovery stars in the nursing home. Vilma was diabetic, so I speculated that she might have gone into a diabetic coma. She wasn't paralyzed like she would've been if she had a clot-caused stroke. My strokes were caused by my plummeting blood pressure due to septic shock, and the watershed brain damage I incurred didn't cause lasting disability. At any rate, Vilma was apparently experiencing a lot of pain, but she was having trouble communicating what she needed to make her comfortable, just as I was.

Country Villa Sheraton was a pretty good nursing home, but the CNAs were terribly overstretched. They would get busy in other rooms and wouldn't be able to get to you quickly after you pressed the call button. That was a problem if you needed a bedpan right away. It got to be such an issue that I finally requested a diaper. I would often have no choice but to use it when a CNA couldn't get to me in time. I can't begin to describe how humiliating it is to have your diaper changed when you're an adult! My long coma and catheterization affected my ability to control my bladder functions, so I often didn't have much warning.

Sometimes, Vilma and I would silently team up to help each other. The CNAs didn't always remember to place the call button where you could reach it when changing bed linens or turning you over to prevent bedsores. When that happened to Vilma, which was fairly often--her call button was farther away from the bed than mine--she would start banging on the bed rail if she needed help. I would take up the clanging because my bed was closer to the door. She returned the favor for me a few times, as well.

I have irritable bowel syndrome (IBS). IBS can cause excruciating cramps, so it's painful in the best situations. Since I had reduced bowel control, as well, probably due to muscle weakness, the slowness of the response to my calls was often painful as well as embarrassing. And even when I did manage to get a bedpan in time, I would frequently be forced to wait a long time to get it removed again. One CNA left me in tears when he took more than half an hour to take the bed pan away. That is an extremely uncomfortable position to be in for that long. Talk about a pain in the ass! I finally got the attention of a nurse and begged her to get me some help. When the CNA was summoned back, he complained that he was busy. "She's been on that for half an hour!" the nurse admonished. I felt so incredibly helpless until the nurse intervened. I'm getting angry thinking about it even now!

I don't have to imagine what elderly people in nursing homes go through when they lose the ability to talk due to strokes or Alzheimer's disease. But even when I couldn't talk, I never lost the ability to complain. That came as no surprise to the people who know me. ;-)
Posted by Unknown at 3:39 PM