Service without a smile 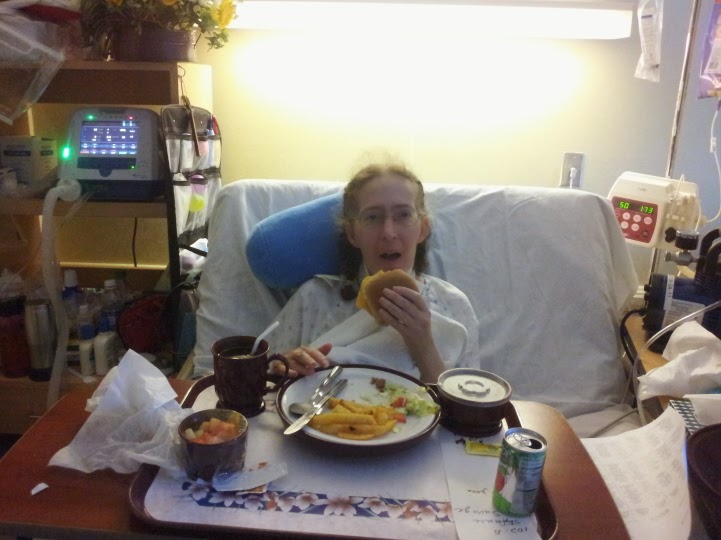 No, this isn't what I practically inhaled for breakfast this morning. The nursing home ground the hamburger back into ground beef (like a sloppy joe without the sauce to bind it) at first--after they finally allowed me to eat--to prevent me from choking or literally inhaling my food, due to my tracheostomy. It was incredibly difficult to eat that way!

Having a mobility disorder has its perks. People are unusually nice to you, saying hi as you pass and rushing to open doors for you. It also has plenty of disadvantages. All in all, I wouldn't recommend it. One service for the disabled that's both good and bad is Access Paratransit. Until I needed it, I never realized how ubiquitous the Access vans were on the road. Now I see them everywhere. It's an invaluable service to the disabled, and it's quite cheap as well--only $2.75 each way, with no tipping required. They also transport the elderly, which is a real boon to seniors who can no longer drive. Recently, the van I was riding in dropped off a woman visiting her husband at Country Villa Sheraton, the nursing home where I convalesced after my coma. It turns out that the driver has a mother in a different County Villa rehabilitation facility. As he drove me home, we fell into a conversation. I told him about my illness and explained about my research into covert cognition for my article, "Covert Cognition: My So-Called Near-Death Experience," which I submitted to Skeptical Inquirer a few weeks ago. I was pleasantly surprised that he didn't say my recovery was a miracle. Perhaps that was because I mentioned I'm a skeptic. Or maybe he's secular himself. At any rate, I thoroughly enjoyed the conversation.

Not all my experiences with Access have been so pleasant, however. The drivers are often late, for one thing. You have to add a lot of extra time if you're going to an appointment. I once got into a conversation with someone waiting for a late Access van. She vented her frustration as we commiserated, emphasis on the misery. Been there, ranted that. I've had to argue with drivers to get them to take me to the correct side of the building when I was being dropped off for my physical therapy appointments. They would often show up on that side, too, when they arrived to pick me up and I would miss the pick up. Keith has had to leave work to pick me up because of this a few times. A couple of times I was able to get them to send another van. They actually had the nerve to send me a warning letter about how many times I had missed pickups! Fortunately, they expunged the incidents from my record after I explained what happened. I could've been suspended from the service if that happened too many times.

The Access customer service representatives are government employees. Some of them have been quite nice, but others have been stereotypical government workers, surly, uncaring, and unhelpful. Today, for instance, they had me cursing up a storm (after I hung up).

I had to wake up a half-hour early to make a pickup at the ungodly hour of 6:20. They were picking me up for my annual Access re-evaluation. I had to scarf down my breakfast to the point of gagging to be ready on time. What's worse, I probably wouldn't even have had the evaluation again if the person doing my first one hadn't screwed it up. I explained to her about my Legionnaire's disease, which led to my six-week coma and caused multiple strokes on both sides of my brain. I also provided a sheet that showed my diagnoses. I say diagnoses because the list is now so long that it extends to a second page. The sheet I provided was that was time shorter, but it mentioned that I also had (at the time) high blood pressure and cholesterol, which were caused by the prednisone I've been taking to control my dermatomyositis. She put down that the reasons I was applying for Access were dermatomyositis, high blood pressure, and high cholesterol. There was nothing about the coma and multiple strokes, And instead of listing Legionnaires disease, she wrote that I had a history of severe pneumonia. Legionnaires disease is a severe pneumonia, so that's not entirely wrong, but Legionnaires disease is a different animal than simple pneumonia. Most severe pneumonias don't cause septic shock, which is what triggered the coma and strokes in the first place. Because of the slipshod job on my application, I was given a temporary approval instead of a permanent one. Now, I admit that it's my fault for not complaining at the time. I meant to, but it's usually such a pain to deal with their customer service, and I kept putting it off.

So, fast-forward to today. I got the callback, alerting me to the arrival of the van. I rushed outside into the chill of the morning, but there was no van there. Keith walked to the curb, but there no van to be seen in front of the neighboring houses, either. I girded my loins and called Access customer service. The person I talked to wasn't one of the nice ones. As I was on the hold, an Access van sped by. When the representative came back online, she said that the driver had reported that no one was at the pickup address and had left. I said that he must've gone to the wrong address because we were outside a minute after the callback. She repeated our address. But we were outside the whole time, I said, a little too loudly, but not quite shouting. She repeated my address, where the driver had supposedly been. Yes, he had the right address, but he went to the wrong one. We were right outside, I reiterated. I was practically spitting nails I was so angry! I did my best to lower my voice and asked if they could call him to come back. Several minutes on hold later, the answer came...nope. I called the regular reservation line, and no, I couldn't get a regular pickup, since Downtown LA is farther from Van Nuys than they usually will take you. They recommended that I call the customer service number again. I got the same surly and unhelpful representative. No, she said, we can't send another van. And, no, she doesn't know when my appointment was set. I could've had someone else drive me downtown, but Keith had to get to work, and Joella was still asleep, having just flown back home the day before after attending her granddaughter's wedding (and boy were her arms tired). She would've done it if I had asked, but I didn't want to.

So, now I'm lying here writing this post instead of waiting a few tedious hours at Access' cavernous evaluation center, with a room for a bus and a few Access vehicles (to test for the ability to board). Last night I printed out my health summary with annotations to help them understand the most critical ones listed. I'm hoping that I won't have to do this next year, but I have no confidence in the quality of the evaluators. In the meantime, I'll have call customer service to make a new appointment. The first time I called to arrange for the pickup, I tried to get a later pickup time. The surly representative (I'm not sure if it was the same one) said that it could be even earlier than 6:20. Oy gevalt!
Posted by Unknown at 1:15 PM