Why I Don’t Hit Men: A Satirical Answer to C.R. Wiley 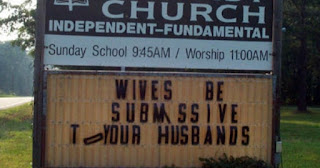 Miracle Girl: Why I Don’t Hit Men: A Satirical Answer to C.R. Wiley

Whenever a woman usurps the power invested in men by the Lord above it saps his glory seed, says Mrs. Jeanie N. DeSky in this evangelical satire.