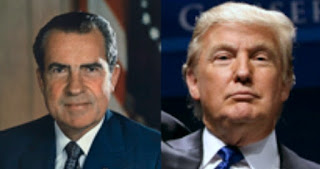 Keith and I have been watching the Republican National Convention. We do that every four years, but we've never seen one like this. Neither have most people alive today.

Donald Trump is scary enough, but when I learned he's taking a leaf from Richard Nixon's 1968 playbook, I became truly terrified.

You should be too.
Posted by Unknown at 3:33 PM