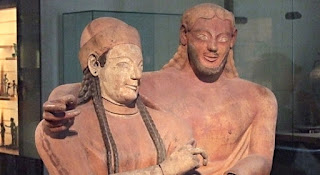 It really wasn't an argument. Keith thought that Professor Steven L. Tuck had lost his objectivity when depicting Etruscan women as enjoying near-equality in the family.

I was doubtful too...at first. But the slow accumulation of evidence--especially from their abundant funerary art and burial practices--convinced me that this wasn't just the biased opinion of a historian who had fallen in love with the Etruscans.

My further research seems to suggest that Professor Tuck's opinion is in fact shared by the majority of scholars in the field. While Etruscan women weren't exactly equal, they had unparallelled freedom compared to their contemporaries.
Posted by Unknown at 10:40 AM