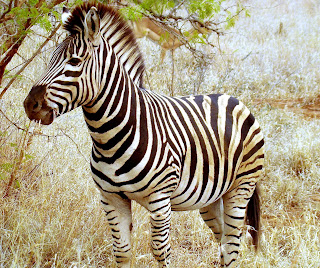 In medical school doctors are taught, "When you hear hoofbeats, think of horses not zebras." It means that you should first consider more common diagnoses when confronted with symptoms. That makes sense...unless they're actually dealing with a zebra. Sometimes when doctors see zebras they only hear horses.

I've confronted this phenomenon repeatedly, as well as another common issue, the fad diagnosis. My two-year "walking pneumonia" when I was in my early teens was misdiagnosed as anorexia, which was first becoming widely publicized. I was still in the normal weight range, albeit near the bottom of the percentile. When the pediatrician said that, my mother told the pediatrician that I ate fine, though I had always had a small appetite. I'm actually notorious for my sweet tooth, yet I have a metabolism that people would sell their souls for (if souls actually existed). But the doctor couldn't figure out the cause of my persistent pneumonia, so he trotted out anorexia as the diagnosis.

It was allergies for a while until that too was ruled out. I was eventually referred to the pulmonary department. After a lung biopsy, they discovered that my lungs had been scarred by the mysterious virus that struck me when I was 11. Yes, my health has been bad for that long.

Years later, I found to my horror that I matched almost all of a long list of potential symptoms of dermatomyositis (DM) down to the last detail--included the disgusting photos of the characteristic Gottron's papules. Yet the dermatologist I saw laughed at the suggestion that I might have DM. He instead gave me a laundry list of skin disease diagnoses. Each area of rash had a different one. I forgot to ask him why I would suddenly develop these separate condition all over my body at the same time.

My muscles continued to weaken, and I was referred to a rheumatologist. She told me I was smart for identifying DM as a likely cause of my constellation of symptoms. But she thought DM was the second most likely diagnosis, behind the far more common psoriatic arthritis. She said if I had to have one, she preferred it to be psoriatic arthritis. After all my research into DM, I knew why. But when I returned home and looked up psoriatic arthritis, my heart sank. It didn't really fit my symptoms at all. The blood tests she ordered showed that I almost certainly had DM.

I was sent back to the laughing dermatologist for a skin biopsy to confirm the diagnosis. The dermatologist looked at my hands and said, "Now it looks like classic Gottron's papules." Actually, the rash had improved quite a bit by this time due to my treatment. He was obviously weaselling out of his cavalier dismissal of the possibility that I might be have dermatomyositis.

When I came down with Legionnaires' disease--thanks to the increased prednisone dose prescribed by that same dermatologist--and I suffered a series of strokes on both sides of my brain, which caused me to fall into deep coma, my doctors played the odds and decided I was a hopeless basket case. This is a related phenomenon to zebraitis. Most people in my situation never wake up, and if they do, they're left irreparably brain damaged. No need to listen to the reports of their loved ones of improving awareness. They all say that, doctors tell themselves. Just continue jotting down "poor prognosis" and move on to the next patient.

The problem with playing the odds with patients is that some will defy expectation or turn out to be a zebra, after all. Well, have a zebra, which is common enough that zebra is also a term for those unlikely diagnoses nonetheless suffered by a small minority of patients, like DM. But who's to tell which is which if you don't look?

I really wanted to be told I didn't have DM, yet a voice in my head told me that there were too many similarities with my symptoms to be a coincidence. That's why I kept bringing up the possibility to different doctors. And unfortunately, it turned out that I did have a zebra after all. My creatine kinase test--the one that diagnosed my DM--tested in the normal range when I first went to my primary care physician. I guess it was too soon. If the dermatologist had recognized my "classic Gottron's papules," treatment would've been started before the muscle damage had progressed. Or, if I had continued being tested, the muscle damage wouldn't have become so severe that I think I'm still suffering from it.

And, yes, it was most likely that I wouldn't recover from the coma. But because they were convinced that I wouldn't, they refused me therapy that could've hastened my awakening and reduced my recovery time. Every time I was moved or stimulated--for the MRI, GI tube insertion, or the move to my first nursing home--my awareness improved.

This is why I'm so eager for the development of bedside covert awareness detection using EEGs. There's no cure for zebraitis, but if it's cheap enough, doctor will have no excuse not to test the comatose. At the very least, they would be able to tell the patient's loved ones whether they're really aware or not.

When doctors play the odds sometimes it's the patients who lose.
Posted by Unknown at 10:43 AM