Message from a Time Before Creation 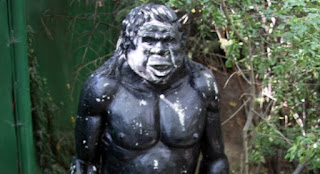 Miracle Girl: Message from a Time Before Creation

170, 500 years ago in Bruniquel Cave in SW France, Neanderthals built rings made of stacked stalagmite, which had been deliberately broken. Why?

The discoverers can only guess. But it took several people to do the work, likely supervised by another. Was it for ritual purpose? Perhaps further excavation will reveal further clues.

But the fact remains that this complex behavior happened 164,500 years before the universe was created, according to creationists.

That's a dumb as Neanderthals were once thought to be.
Posted by Unknown at 1:20 PM