Every step I take, every move I make...

From the beginning of my recovery, milestones have been achieved before I realized it. I'll be performing some task that I always took for granted, and it's some time before I suddenly realize that I'm doing something I couldn't do before. Yesterday was one of those days.

This phenomenon is one of the main reasons that my recovery has forced me to become more willing to take on physically difficult endeavors. That and nearly dying makes merely feeling dead seem less dreadful somehow.

It's also the reason why I waved off the well-meaning suggestion of one of the volunteers at the Japanese Garden that I take the stairless route out the back of the tea house. And that's why I climbed every step in the garden. Yeah, I know it's harder--that's the point. "It's good for me," I assured her.

Indeed it was. I noticed there was something different in the way I marched up the open steps without rails within the garden, a certain ease. And I was doing it much faster, too. I thought, wow, I really have gotten stronger. 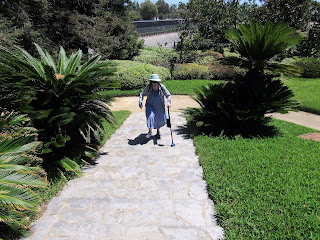 But it wasn't until I ascended the steep flights to the observation area that I realized that I was mostly powering up the steps without pulling myself up using the rail. I used to cling to rails as if they were life preservers, which I guess they were. Then came the real shock: I was taking the steps in sequence. Instead of step, stop, step, stop, I was actually climbing the stairs, one step after another! I haven't done that since before I developed dermatomyositis, which damaged the very muscles I need to perform this instinctive movement. And that was before the strokes and coma.

This is the reward that awaited me. 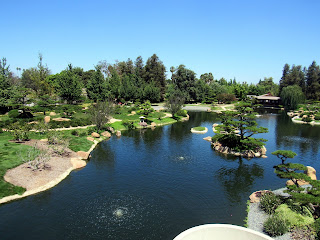 Plus the knowledge that I was one step closer to complete recovery.

For more feats of stairing-do, at the Japanese Garden and elsewhere, check out my recovery walk Tumblr.
Posted by Unknown at 4:23 PM